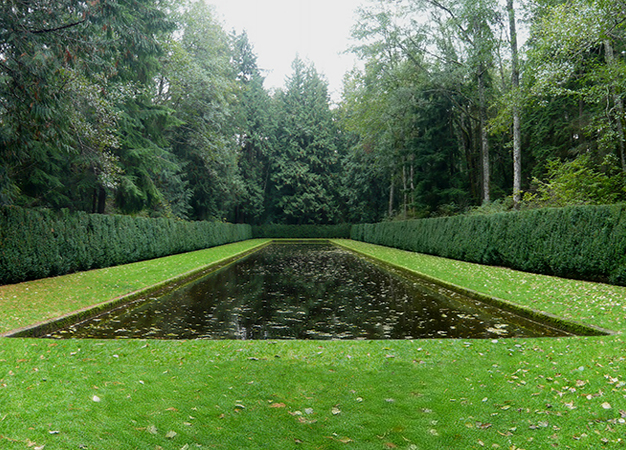 The landscape contains an annotated catalogue of situations, in which the genius loci is recorded and secured. Ranging between the permanence  of the geological substructure  and the transience of the ordinary and the everyday, three aspects of the genius loci can be discovered that evoke a specific reaction in landscape architectural design: the topography as the carrier of structure; the physical context, space, materials, climate; and the rhetorical landscape, landscape as a giver of meaning. The landscape architectural transformation is in its essence an expressive transformation of these aspects.

The enclosed garden – a condensed space with a nature reference, spatially secluded from its context -  is a specific transformation in this sense that it is closed off from the same context that it expresses. It intervenes, makes the context visible, mirrors and reflects, but does not alter the context. The transformation takes place within the boundaries of the garden, where the landscape quality that is the subject of transformation is framed and elaborated in detail. In this small-scale, concrete intervention within the urban landscape the interaction between the new metropolitan condition and the existing landscape is dramatised.

Three models for the transformation of the genius loci can be distilled from the enclosed garden. Exposing landscape space faces outward, capturing the urban/landscape panorama. The spatial qualities and the scale of the landscape are introduced as a landscape space within the metropolis, confronted by the enclosure of the garden. (Example: Observatorium Nieuw Terbregge ; Het Observatorium, 2001). Magnifying the site takes the physical elements of the genius loci in and transforms them. It gathers and selects what is found on site, displays and magnifies, while itself withdrawing from the context. (Example: Reflection Garden; Richard Haag, 1979-84). Representing the landscape idea is a rhetorical landscape, like a story or a poem, composed to ‘instruct, move and delight’. These places evoke their origins. They are indissolubly bound to the urban tissue, and at the same time they are essentially ‘other spaces’, contrary to their surroundings. The image of the garden is strong, counteracting the outside image, aided by sensorial effects. (Example:  Paley park ; Zion & Breen, 1963-67).

In their precision these models can provide design tools or strategies for the choreography of the urban landscape: an urban acupuncture of public spaces as a repose from urban life at strategic locations in the urban landscape, making the underlying permanent landscape layer visible and anchoring the metropolis in the genius loci.

in Nordic Journal of Architecture No.1 vol.1 Autumn 2011.