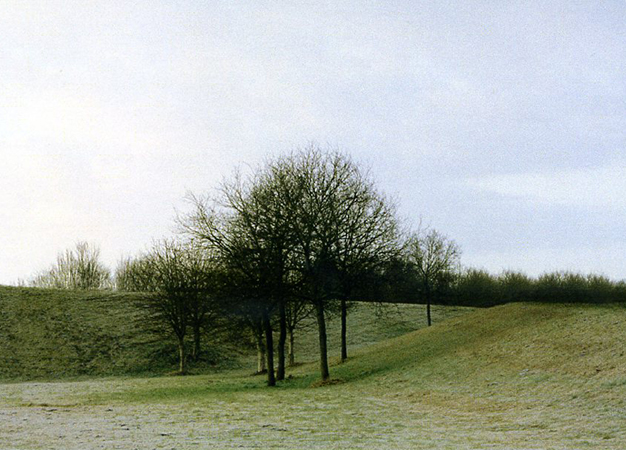 Paradises along the A10

At the exits of the A10, in the no man’s land between the motorway and the city, are places of unexpected beauty. The association with a series of paradisiacal gardens springs to mind: inaccessible, tranquil, lush and unique, but nonetheless everyday and universal. Between 2001 and 2003, photographer Judith Jockel made pictures of these ‘gardens’, in which she exposes the magic of these everyday landscapes.

We use the Amsterdam ring road 24 hours a day. But who has ever set foot in the area just one metre behind the crash barrier? Next to the lanes of asphalt lies an unfamiliar, diffuse area, full of bushes and trees and tall sound barriers, an anonymous strip that separates the world of the elevated motorway from the city below.

It is a happy coincidence that the motorway landscape itself generates empty and tranquil places, which – like the eye of a hurricane – are both the consequence of, and in contrast with, the speed of a hundred kilometres an hour. These places are the left-over areas between the motorway and exit ramps, inconspicuous places that we as yet have no eye for. However, if they are recognized and designed as potential landscape theatres, then they can make a meaningful contribution to the urban landscape.

The potential of landscape theatres becomes clear in the pictures Judith Jockel made of the gardens in the nooks of the A10 exits, miniature landscapes that, more than elsewhere, are landscape theatres of their own. The photographs show how carefully designed and absolutely untouched these gardens are. The rhythm of zooming in and out, always within the same frame, photographed in neutral weather conditions, always during the day and never at night, in an indefinable season of the year, reflect the generic character of motorways. On the other hand, every visible reference to the motorway and the world that belongs to it (crash barrier, electricity pylons) is absent in the photos, and the camera position, incidence of light, the details of the pictures, are carefully geared to the unique character of every location. The small pictures, like medieval miniatures, show a glimpse of impenetrable paradises.